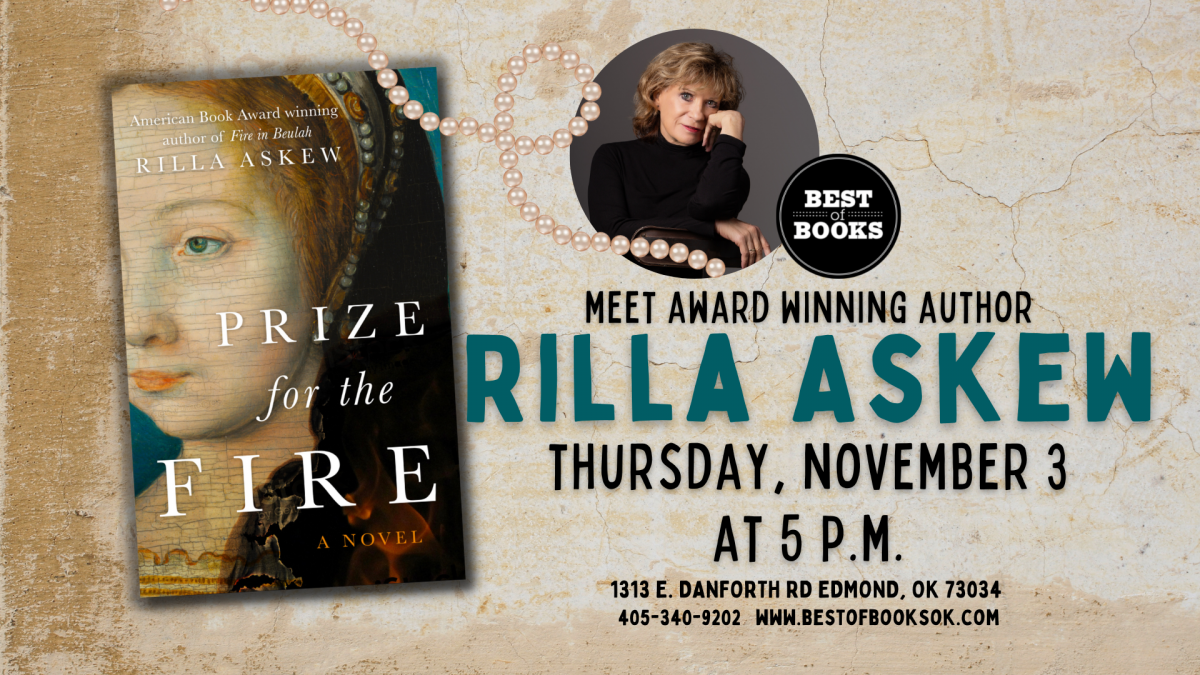 Best of Books is proud to present American Book Award winner, Rilla Askew, for an evening book signing in celebration of her newest novel, PRIZE FOR THE FIRE!

This event is free and open to the public. It begins at 5 p.m. on Thursday, November 3rd.

About the book: Lincolnshire, 1537. Amid England’s religious turmoil, fifteen-year-old Anne Askew is forced to take her dead sister’s place in an arranged marriage. The witty, well-educated gentleman’s daughter is determined to free herself from her abusive husband, harsh in-laws, and the cruel strictures of her married life. But this is the England of Henry VIII, where religion and politics are dangerously entangled. A young woman of Anne’s fierce independence, Reformist faith, uncanny command of plainspoken scripture, and—not least—connections to Queen Katheryn Parr’s court cannot long escape official notice, or censure.

In a deft blend of history and imagination, award-winning novelist Rilla Askew brings to life a young woman who defied the conventions of her time, ultimately braving torture and the fire of martyrdom for her convictions. A rich evocation of Reformation England, from the fenlands of Lincolnshire to the teeming religious underground of London to the court of Henry VIII, this gripping tale of defiance is as pertinent today as it was in the sixteenth century.

While skillfully portraying a significant historical figure—one of the first female writers known to have composed in the English language—Prize for the Fire renders the inner life of Anne Askew with a depth and immediacy that transcends time.

About the author: Rilla Askew is a novelist, essayist, and short-story writer known for her award-winning historical fiction. Fire in Beulah, her novel about the 1921 Tulsa Race Massacre, received the American Book Award. Her Dust Bowl novel, Harpsong, received the Oklahoma Book Award, and her essay collection, Most American: Notes from a Wounded Place, was long-listed for a PEN America Literary Award. She is Associate Professor of English at the University of Oklahoma. To learn more about her work, visit rillaaskew.com.

This website uses cookies so that we can provide you with the best user experience possible. Cookie information is stored in your browser and performs functions such as recognising you when you return to our website and helping our team to understand which sections of the website you find most interesting and useful.

Strictly Necessary Cookie should be enabled at all times so that we can save your preferences for cookie settings.

If you disable this cookie, we will not be able to save your preferences. This means that every time you visit this website you will need to enable or disable cookies again.